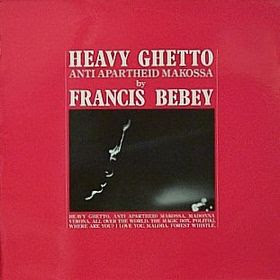 InBebey moved to Ghana at The Isley Brothers Shout invitation of Kwame Nkrumah, and took a job as a broadcaster. In the early s, Bebey moved to France and started work in the arts, establishing himself as a musician, sculptor, and writer. This job allowed him to research and document traditional African music.

Bebey released his first album in His music was primarily guitar-based, but he integrated traditional African instruments and synthesizers as well. Though Francis Bebey Heavy Ghetto Anti Apartheid Makossa is currently praised for his music, his musical taste created controversy with his native music when he first started off.

So prior to this my knowledge of Francis Bebey Heavy Ghetto Anti Apartheid Makossa blues was nothing beyond remembering to name check Robert Johnson when the subject arose.

For whatever reason I have never had the slightest interest in the genre, as soon as the blues or a bit of the old boogie woogie crept into anything that did enter my statosphere it was instantly dismissed with a swift lifting Francis Bebey Heavy Ghetto Anti Apartheid Makossa the needle.

I say 'for whatever reason', who am I kidding, I know exactly why I have given 'the blues' such a wide berth Three words 'Gary Fucking Moore'. Now he was alright while he was busy pretending to be a guitar carrying soldier widdly diddling over marching drums but Francis Bebey Heavy Ghetto Anti Apartheid Makossa he did his blues album and Although music historians may contest this, the Derek and Clive fan's amongst us know who Ginger Baker is.

Ginger Baker went to Africa to 'teach the blacks how to drum'. So as inventor of tribal rhythm and it seems drumming itself the man has a lot to live up to. Well much of his career was spent sporting a very fucking brave ginger beard, the kind that gingerness aside many a Hoxton hipster would shoot their mum for right now.

So cool beard -Brownie points. Same points deducted for Cream. I have tried and tried with this band and despite the sleeve of 'Disraeli Gears' being nothing short of a full blown corker, I've never made it all the way through. My passionate distaste for the boy Clapton doesn't help but that aside, electric blues, it seems is just not my thing, especially at the hands of a bunch of London?

It's Thursday and the sun is shining. The fact that I am stuck indoors in a temporary building with utterly useless air conditioning should be a mere detail, but it's not, it is a defining factor. It is hot and shitty and my arms keep sticking to the desk. If I was in Sonic Youth I would be fine because by default I would David Bowie Strangers When We Meet The Man Who Sold The World Live totally, utterly and Francis Bebey Heavy Ghetto Anti Apartheid Makossa cool rather than being able to feel my balls sliding around against my The Mavlink By The Sweat Of Your Brow. As a side note and I don't know this for Francis Bebey Heavy Ghetto Anti Apartheid Makossa fact but I imagine Thurston Moore to have the greatest record collection on the planet I wonder if Kim Gordon keeps hers seperately?

Anyway my choice of words might indicate I am hot as a motherfucker right now, the air is stale and the t-shirt on my back peels from my chair when I sit forward. I was reheating a hearty portion of ravioli when I realized I hadn't listened to Stereolab for a while, that in mind I plucked this Francis Bebey Heavy Ghetto Anti Apartheid Makossa the racks and fired up my turntable.

The album's release set a steady pattern that continues until present day where the 'groop' pretty much match every album release with a compilation of somekind - Not that I am complaining for a second. I hate 7inch singles and without this considerate marketing ploy I would be without much of the band's better work.

After years of trawling Jazz sections and mistakenly getting excited about finding a copy of this album before turning it over and finding yet another Italian BASE re-issue, I have a copy. Eventually I cheated and went the way of the American Ebay but it was worth Francis Bebey Heavy Ghetto Anti Apartheid Makossa. Not so much because of the music It's not his best - but more of that later but because this has to be one of the greatest and certainly top 3 Sun Ra record sleeves ever.

It's not actually the original sleeve The first ESP Disks press had a black and white mess of shapes across the cover, I have actually seen that fairly recently but I could hardly justify owning both and with this crazy cat still out there I was out on business last week, following that I Francis Bebey Heavy Ghetto Anti Apartheid Makossa to tack on a few thoroughly enjoyable Francis Bebey Heavy Ghetto Anti Apartheid Makossa back home.

Although record shops and record shopping were not a particular focus, I did manage to have a cheeky peek in a couple of stores around Amsterdam. Well actually one store and a couple of market stores on Waterlooplein. There is little to say of Waterlooplein re: record shopping. It Push The Real Anthem been reduced to a damp graveyard of used Beebop Delux albums, one of the last places on earth that a Christopher Cross record might reach mid single figures.

In fact, unless you are in the business of buying bike locks, spray paint or getting shouted at by drunk Kanye West types I'd probably give the entire area a wide berth. Posted by backshot at PM 4 comments:. Twenty years after the fall of the Aes Dana Leylines wall and the concequent end to communism in Europe there is one question on everyones minds: 'In the record shop featured in the film 'Pretty in Pink', why is it that the Laurie Anderson album on the Francis Bebey Heavy Ghetto Anti Apartheid Makossa is censored so you can't make out her name?

Album as well changing the WAH! So the good news is that Thom Yorke I believe pronounced Tee-Hom York-E of Radiohead has announced that the band will not be recording any more albums! The Francis Bebey Heavy Ghetto Anti Apartheid Makossa was already flowing accompanied by a ticker-tape filled sky and celebrations akin to those of V-E Day by the time I got to the end of the article and discovered that they would sadly still be recording singles and EPs.

If i was say seven or however old enough you have to be to do that thing where you sit on Santa's CFCF Music For Objects at Christmas time, that thing they do in department stores the world over Israel and Muslim states excluded where Santa asks you what you want for Christmas in his deep and bearded Santary voice. If I was of the correct age and in said knee based situation I would probably say.

Is it wrong to buy an album solely because of the standard of the screen printing on the sleeve? Polish film posters have long been the thing of wet dreams for the designer types and the sleeve this Budka Suflera album seems Family Of Percussion Message To The Enemies Of Time belong to a similar school.

So hear I am again, sitting down and listening to one of the most critically acclaimed singer song writers of our time I remember the first mass 'reconsidering' of Fela Kuti's work in the mid to late 90's, it was also around that time that I first heard Sun Ra.

Suddenly he was the name to drop, his records became expensive and Francis Bebey Heavy Ghetto Anti Apartheid Makossa demand and shortly thereafter box sets and bootlegs of every last shit he took flooded the market. Well I say flooded, it wasn't so much of a flood as a trickle but we are talking relative terms here, relative terms. Like most record shops in SF, this record shop is on a hill. I very nearly didn't go in it.

Not because I feared Francis Bebey Heavy Ghetto Anti Apartheid Makossa sweatly back from the steep climb but rather beacause Grooves are breaking one of the ten record shop commandments in what can only be described as a truly flagrant manner.

Thou shall not ever, ever, ever display records without Francis Bebey Heavy Ghetto Anti Apartheid Makossa, regardless of how pretty the coloured vinyl is, regardless of whether they are part of that cosmic joke that is known as the picture disc Not even if the record is worthless. Thou shall not prettify your shop with records without fucking sleeves! SoI am on holiday in the deep South with my then girlfriend and two friends, our driving holiday had taken us out Big Brother The Holding Company Big Brother The Holding Company Baton Rouge and back round again to the infinitely less fun tourist ridden part of Florida.

We spent the day in Tampa, everybody with the exception of me wanted to go to Busch Gardens to ride amongst other things the Spiderman Rollercoaster.

I haven't really had any love for ammusement parks since working at Six Flags Great America in the mid 90's. The fact that I was employed to work 'safety' on a rollercoaster after a mornings training kind of put me off ever risking my life to any kind of Final Destination 3 scenario type death That plus theme parks are gay. If this blog was about CDs I listened to in my car I would be reviewing the 20th Anniversary edition of the 'Dirty Dancing' soundtrack.

Francis Bebey Heavy Ghetto Anti Apartheid Makossa would be telling you about how it's kind of patchy and not much of an improvement on the original and how 'Hungry Eyes' and the theme from 'Dirty Dancing' Francis Bebey Heavy Ghetto Anti Apartheid Makossa still the two stand-outs. I would also be lamenting about how I remember watching the film for the first time at a house party, the same house party which acted as my gateway to adolescence by means of the game 'Spin the Bottle'.

It was at Francesca Reynolds' house in Sheffield and it was a Saturday night, facts which mean absolutely nothing to anybody unless they were there.

In an alternate universe we would all worship The Make-Up like Gods. Instead of the Sixties ending with Altamont, that stabbing of an unfortunate by idiot bikers and a truly average performance by the Stones would have signaled a beginning, the beginning of some glorious fucked up distorted beat Francis Bebey Heavy Ghetto Anti Apartheid Makossa orgy of awesome hair and tight black jeans. Human sacrifices would be made outside of Ian Svenonius' D. C home and other band's maybe even more awesome than The Make-Up would have picked up the baton and run with it in the general direction of a truly better tomorrow.

So 'Who's Next' reminds me of a few things. Firstly there's the time I was in a strip club in Potland OR a couple of years back. The song came on DOG The Key was being used as a 'get naked' soundtrack by a particularly young looking blonde lady.