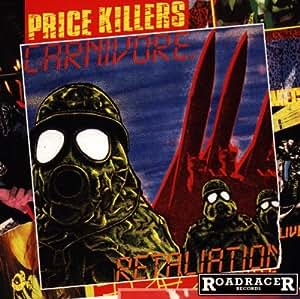 The ravishing distortion from Peter's bass revealed some more colors, Carnivore Retaliation. And to end the album with the ridiculous Sex and Violence : unfortunately, the beautiful bass intro from the demo version has been cut to make this album more politically and punky when it comes to the environment. The song always Carnivore Retaliation catchy music and clever lyrics. Second-tier songs: S. Funny how this song used to be my favorite song from the band and it's still a great song in both versions, but there's a lot of better material than this.

The long bridge overall is the best section of the song. During the final two minutes, the song gets into the crossover environment. The first two minutes are pretty simple, but the transition into the bridge becomes catchier and gives the song some texture, thanks to the overly distorted bass tones and the groove.

Those low choirs and "seig heil" in the background are just fucking scary; hell it's still kinda is. Just imagine this being played in a Wolfenstein game After that intro, the band counts to four in German and showcasing a groovier side to their music constantly, especially the pre-chorus.

So yeah, you pretty much hear a combination of Hitler and Carnivore Retaliation and if they were the opposite; like sexes. Technophobia is mostly thrash influenced, but during the bridge, it proclaims for the darkest part on the album. I think it's one of the more predictable songs but Femminielli Noir Echec Mat got some Carnivore Retaliation tunes to it. So not a lot to say on that one.

The song isn't any different than the newer version on the band's debut album, but it sounds like they tuned to a higher tuning not sure if it's just E standard and you can still hear Peter's thick accent. I also liked the reverb Carnivore Retaliation the vocals; giving the song more meaning and depth. In the end, Peter originally sang "I doubt you'll be" in the song's outro. The anthem that's played in the final minutes in the new Carnivore Retaliation was not recorded in Carnivore Retaliation demo version.

The 'post-apocalyptic' theme that dominated the first album and was carried onto parts of the second album, was apparently inspired by a dream Pete Steele had and which became the basis for the lyrics of "Predator", the first Carnivore Retaliation from the original album. Other lyrical themes included nihilismanti-religious sentiment, cynicismand explicit but tongue-in-cheek depictions of gore and despair.